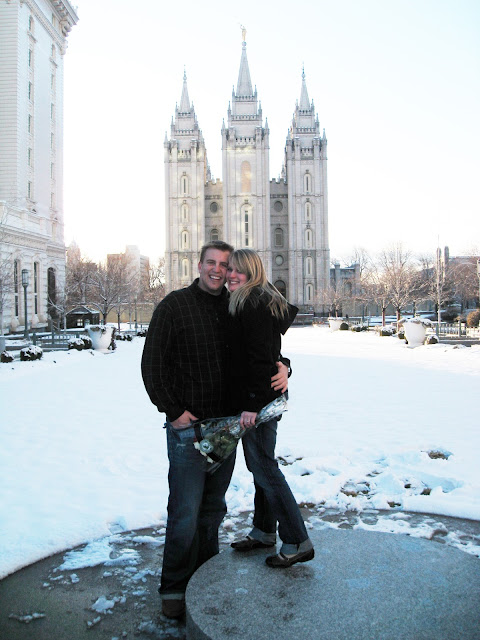 This is the story of how Clint asked me to marry him. It happened on Valentine's Day 2009 on Temple Square with a dozen red roses and a lovely Hispanic family. But I'm getting ahead of myself. Lets start at the beginning.

The weekend of Valentine's Day that year just so happened to be a weekend where my family was in town. They were spending the night at my grandma's and so I drove my college-going tushy from Provo to North Salt Lake. Clint came with because we were dating and it was Valentine's weekend after all.

Valentine's morning began with an awkward gift-giving session where nobody gave any gifts but Clint to me. He insisted everyone gather around in my grandmother's living room and watch as I opened up a little box. Mind you, if it was a wedding ring I was going to say "no" because proposing in your girlfriend's grandma's living room was probably the least romantic location ever.
Relax.
In the box was a string of pearls (which I later found out was a decoy gift so I wouldn't expect any other surprises).
Overall, the grandma's-house-gift-exchange was kinda uncomfortable.

And then I spent the rest of my Valentine's Day doing what any normal single girl does: I spent it wedding dress shopping with my mother. No. Seriously.
So let me explain...My mom lived 6 hours away from me, she wouldn't be back in town until May, Clint and I had talked a lot about marriage at about that time, and I needed her help tackling the most significant task of a wedding day...that dress!
Um k?

The guys were all busy doing "guy stuff", so it was a terribly romantic day all around.

Then at about 4:00 in the PM my mom's all, "Hey! The guys just called and they said we should meet them on Temple Square to hang out."
Subtle.

We trekked to Temple Square. Parked. My mom immediately disappeared. And then I wandered around like an idiot as I passed not 1, not 2, but 3 couples getting engaged!

But then, just ahead was Clint. And he had what looked like a bouquet of roses, so I figured I was supposed to be wandering towards him.

...just before I closed in on him, a short man stopped right in between us and mumbled something in a Hispanic accent like, "take our picture please?"
We were both amused by the interruption as Clint fumbled the flowers into my hands and took a picture of a Hispanic family of 8.
So that was awkward.

After, he got down on one knee, mumbling something like "will you put up with me forever?" and I was like "I guess I will" (all in good humor of course)

And that is the story of how Clint proposed to me on the most predictable day, at the most expected location, with the most common flower. And I still said yes ;). 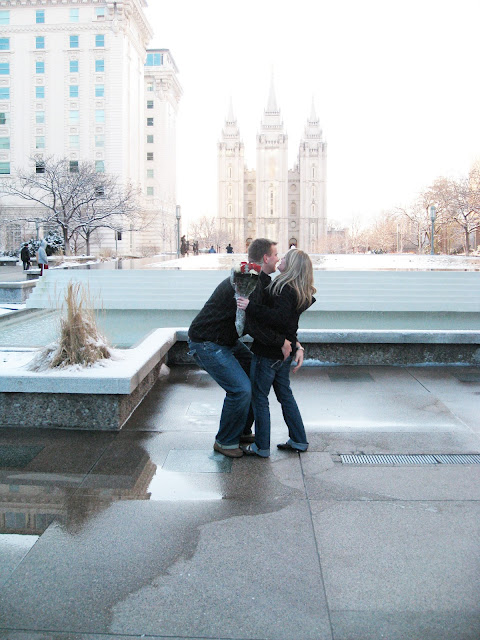 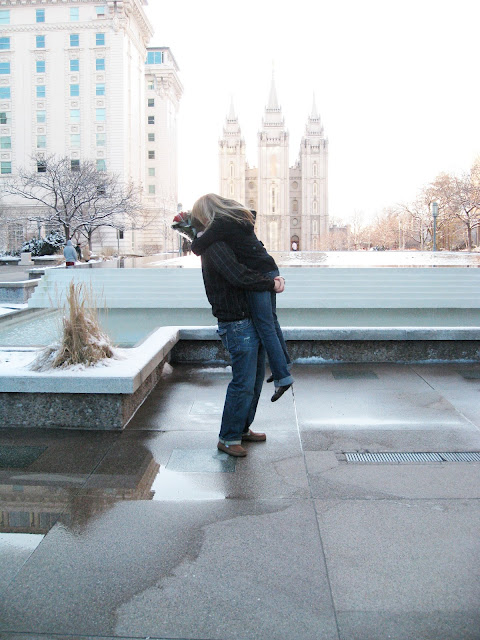 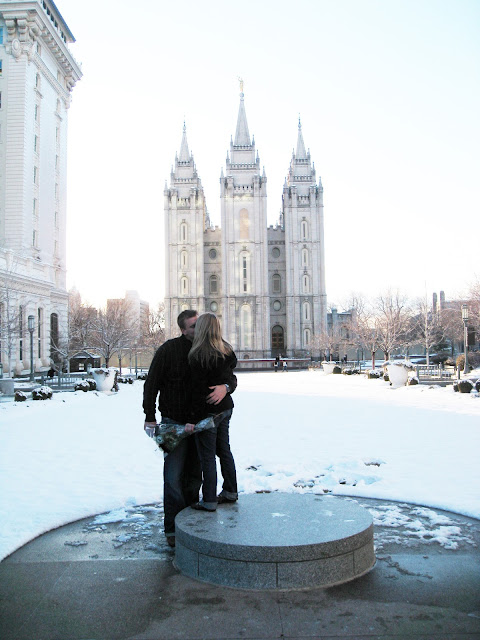 I am happy to announce that Clint and I are just about 4 years happily married, and that I threw away those terrible boring black flats.

Tweet
Pin It
Posted by Alixandra Lewis Adams at 8:17 AM